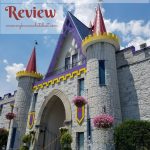 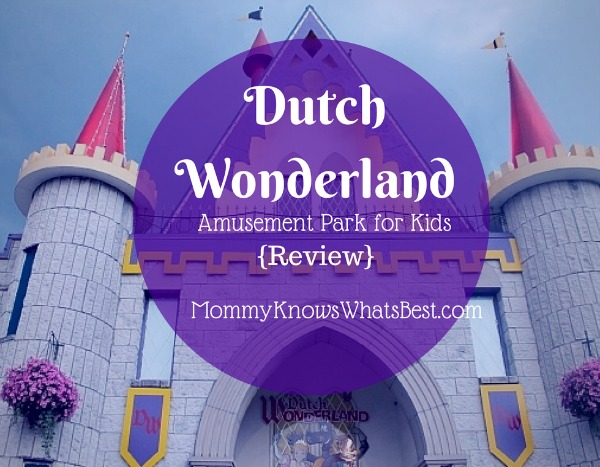 Disclosure: I was given tickets to visit Dutch Wonderland Amusement Park with my family. The words and opinions are my own.

Ever bring your kids to a big amusement park, only to have them disappointed when they can’t go on the rides because the kids are too little? It can turn fun plans into a day of temper tantrums and tears! 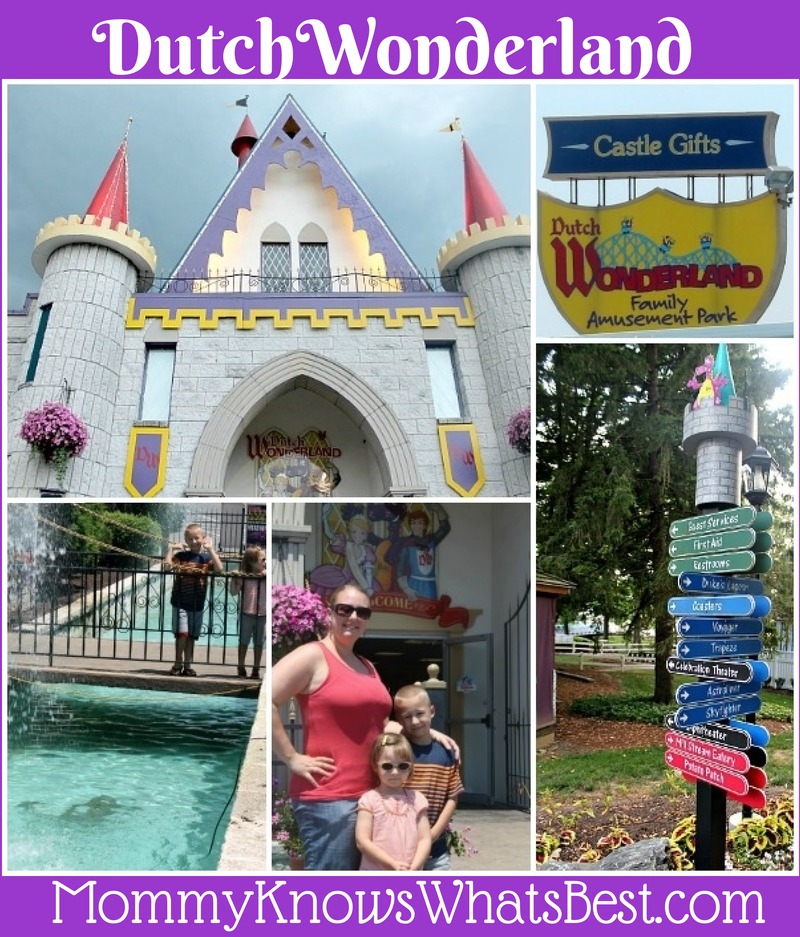 Dutch Wonderland is located in Lancaster, PA. Opened in 1963, it was once a park with only four rides, but now has 35 kid-friendly rides, attractions, live shows, a water park, and plenty of food options. There is so much to see and do on its 43 acre property!

What Age is Dutch Wonderland Good For?

Dutch Wonderland Amusement Park is the fun destination for kids of any age, but for those who can ride on the rides, it seems best suited for ages 2-12, in my opinion.

My oldest son, who was 6 at the time, had fun on everything since he was tall enough for it all. My 3.5 year old daughter was able to ride most things, except for the Kingdom Coaster because she wasn’t tall enough. My one year old (who’s tall for his age), was able to go on a few rides as long as he sat with his brother or sister. 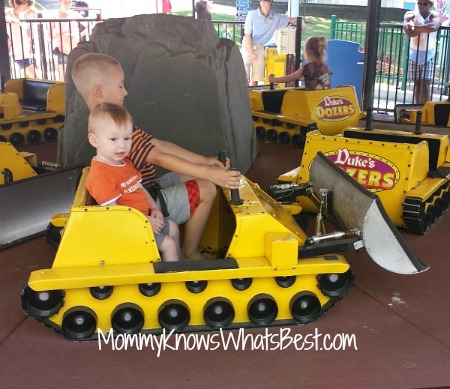 My youngest and my oldest kids having fun on Duke’s Dozers at Dutch Wonderland Amusement Park!

Other than the rides, though, there’s so much to see and do! The park is very colorful and lively, with small exhibits, games, the water park, and live shows going on all day. We saw a high dive show in the Aqua Stadium, and all of my kids really enjoyed it! There’s also Exploration Island which is open for all ages (but I’ll talk about that later!). 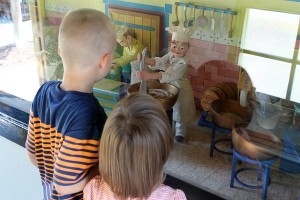 Inside a gingerbread house watching the little bakers work

For kids older than 12, the park might seem too ‘kiddish’. The rides may not excite them as much. If they’re there having fun with younger siblings, though, they might enjoy themselves!

What Time Does Dutch Wonderland Open?

Dutch Wonderland opens at 10 am and closes at 8:30 pm in the summer. There are a variety of times for pre-season and post-season hours, and also different times for holidays or special events.

We arrived at 1 pm, a bit later than our anticipated 11 am-12 pm arrival due to some traffic. For us, it was perfect timing: the lunch hour rush was just about over and we were able to enjoy a quiet lunch in the Mill Stream Eatery, where we were able to have a variety of theme park foods for the typical amusement park prices. 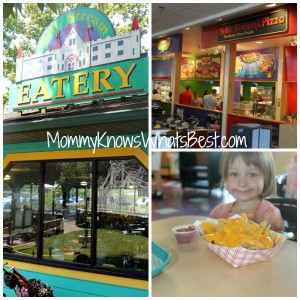 The park closes at 8:30 pm, even in the summer. It may seem early, but think about it: it’s the perfect time to get little kids home (or in a hotel room) and in bed! They won’t give you a hard time about staying later because they have no choice but to leave since the park is closing!

What Rides are at Dutch Wonderland?

As I mentioned above, there are 35 kid-friendly rides at Dutch Wonderland. While we didn’t get to go on all of them, I will tell you about the ones we enjoyed! 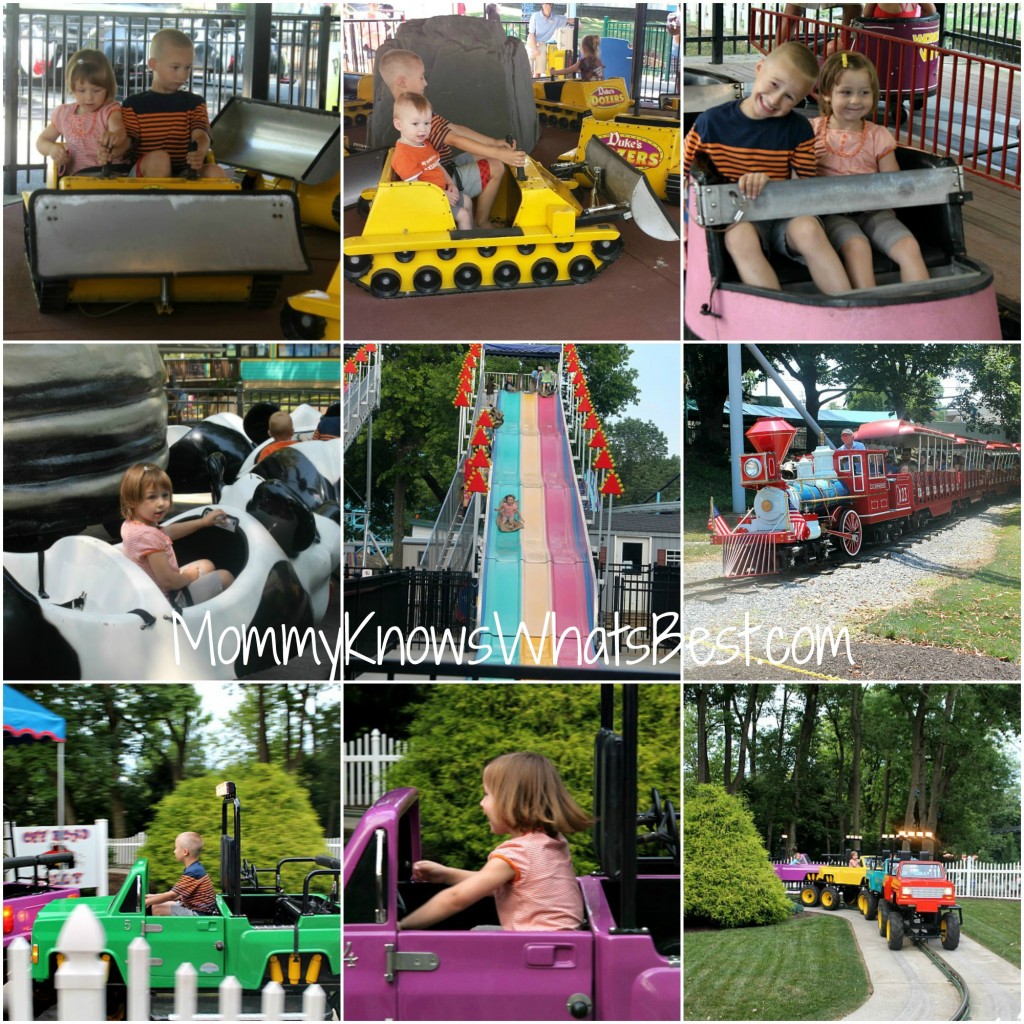 Fun rides for the kids at Dutch Wonderland Amusement Park!

What’s great about all of these rides is that except for the Kingdom Coaster, both of my older kids were able to ride them all! (My daughter wasn’t quite the right height for the Kingdom Coaster, but she made no fuss that she couldn’t go on it. ) We didn’t have to trek all around the park looking for acceptable rides for their ages/heights. Everything at Dutch Wonderland was made for them! 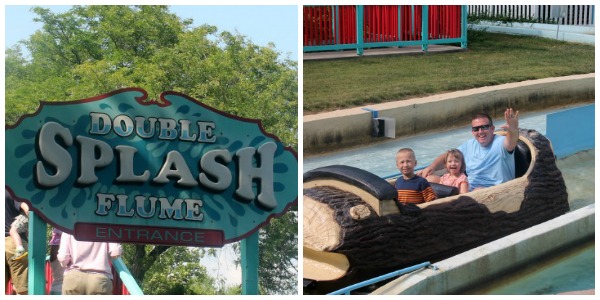 My husband enjoyed the Double Splash Flume with the kids! 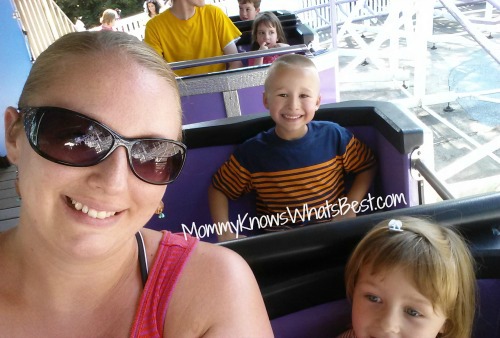 Even I got to ride the roller coaster with the kiddos at Dutch Wonderland!

When I first started to plan our trip to Dutch Wonderland, I found out about Exploration Island, which basically made my oldest son drool. Why?

Exploration Island, new to the park for 2014 and located in the rear of the park, is a rediscovered island where adventurers can dig for dinosaur bones, walk with moving dinosaurs, ride the iconic Turnpike Ride, and go on the Gondola Cruise around the island.

When we first crossed the bridge into Exploration Island, we were greeted with the sites and sounds of a tropical island and the Dino Dig. In the Dino Dig, little adventurers could dig in the sand to find dinosaur fossils and bones. There were skeletons of a Triceratops and a Stegosaurus, along with T-Rex fossilized footprints! The helpful staff dressed up as tour guides helped the kids clean off the bones and find the fossils.

Next up was the Prehistoric Path. This was really cool! We got to see about a dozen or so animatronic dinosaurs and their families up close. They made real-life sounds and movements (which, coming from the T-Rex was a tad scary…but awesome!).

We learned so much about the dinos. Did you know that Triceratops is the most common fossil found in North America, or that if T-Rex didn’t go extinct, scientists believed that he may have evolved to have even smaller arms or no arms at all? (Giggle… That’d actually be hilarious. Frightening, but hilarious!). 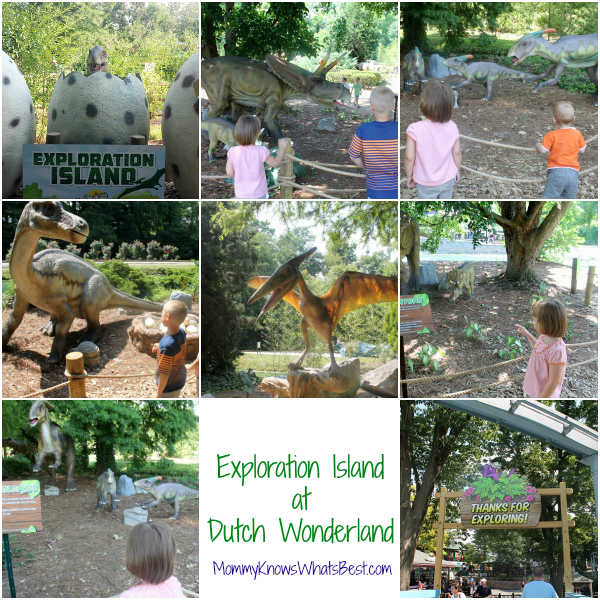 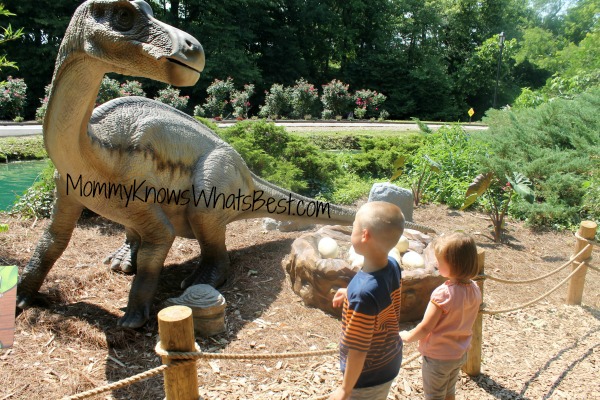 Okay, these signs were pretty funny. Couldn’t help but laugh! 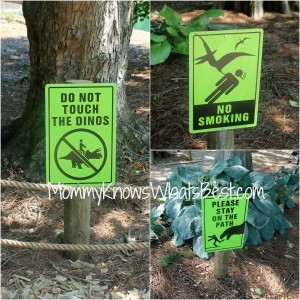 This was definitely my kids’ favorite part of the park. We spent well over an hour digging and walking among the dinosaurs!

There are two rides within Exploration Island: the Turn Pike Ride and the Gondola Cruise. While we personally didn’t get to experience them, it seemed like everyone else was having a blast!

There are a variety of shows at Dutch Wonderland, featuring the characters Princess Brooke, Duke the Dragon, Knight of Safety, Queen Gwinneth, the evil wizard, Merlin, and more! We watched a high dive show at the Aqua Stadium about the princess and the evil wizard. The characters acted out the show while showing their crazy good diving skills from the platforms above.

You can see the shows pretty much all day long, and even meet and greet the characters! 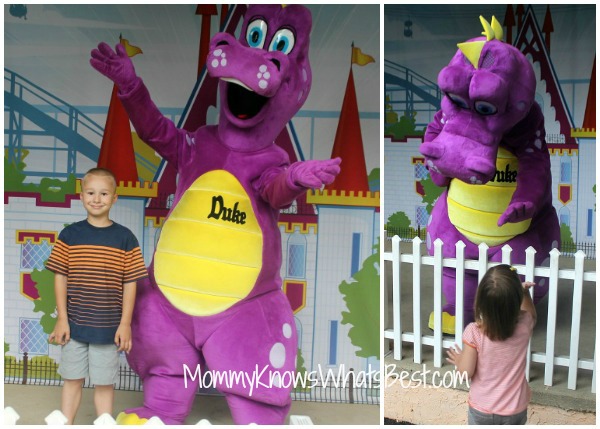 Our final destination of our fun day was Duke’s Lagoon, the water park area of Dutch Wonderland. The Pipeline Plunge slides are in this area, along with a multi-level waterplay platform, complete with geysers, sprayers, tipping cones, a giant tipping bucket, colorful animals, smaller water slides, and a small water castle. 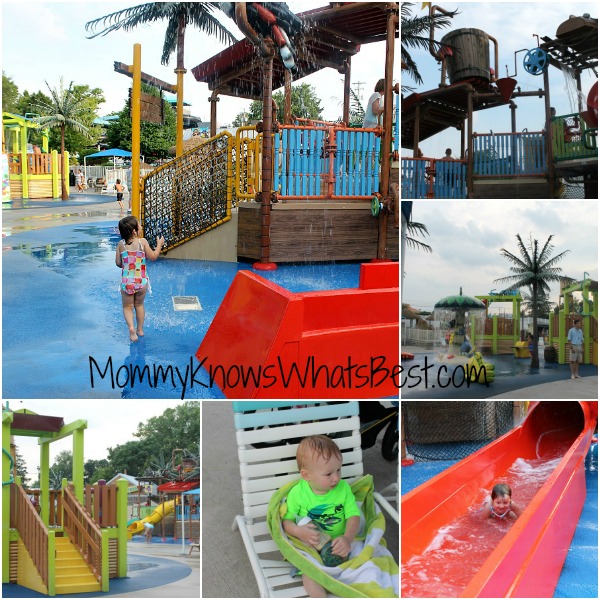 My kids had a blast cooling off in this water park! There were enough small slides and geysers to keep my little guy busy, and a super-fun jungle gym area for my older kids to play in. For the parents, there were plenty of chairs and tables to sit at, many under umbrellas or palm trees. There were even cabanas to rent, if a family wanted a central area to relax.

How Much Are Tickets for Dutch Wonderland?

Did you know that kids 2 and under are FREE at Dutch Wonderland? I didn’t know that until we were scheduling our day. For everyone else ages 3-59, for all of this awesome fun, tickets are about $44.99 if you buy them online.

There are senior citizen discounts along with group rates. If you buy your tickets ahead of time, you can even visit the park the night before three hours before closing to preview everything there is to see and do!

The only things you need to pay extra for are the pony rides (Yes! Pony rides!! Approx $6.), any park food, lockers, cabanas and games. That’s it! Everything else is included! It’s a great value for everything you get to see and do!

When is Dutch Wonderland Open?

Dutch Wonderland Amusement Park opens in late April for weekends only until the last week in May when it’s open all week long. It’s open weekends only in September til’ mid October.

I suggest a visit during a week in the summer. We visited the park on a Thursday and had a great day with almost no lines and plenty of space for everyone to move around and have fun! 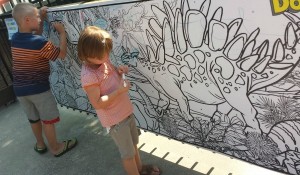 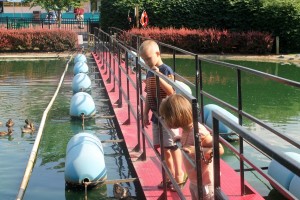 Is Dutch Wonderland Worth It?

Yes, yes, yes!! Dutch Wonderland Amusement Park will be a ton of fun for you and your family.

Since opening on May 20, 1963, Dutch Wonderland has consistently been recognized as a premier family amusement park and has been voted one of the Top 5 Best Kid’s Park in the World by Amusement Today magazine. We invite you to plan a visit to find out why generations of families have visited us and proclaimed us to be A KINGDOM FOR KIDS!

I couldn’t agree with that statement more. My kids had a blast. We had an absolutely fun day as a family. We would definitely go back!

My family and friends have since been sharing with us their experiences as young kids many moons ago visiting the park with their families, and they share our feelings about the park. You would not regret visiting Dutch Wonderland and will make many fun memories with your own families!

Click here and use PROMO CODE  summerblog19 to order your tickets online.

Many thanks to Dutch Wonderland Amusement Park for providing my family with tickets to enjoy the park! We had a blast!

Have any questions about the park or want to share your favorite family memory with me? Leave a comment below!

Pin This to Remember when Planning Your Trip! 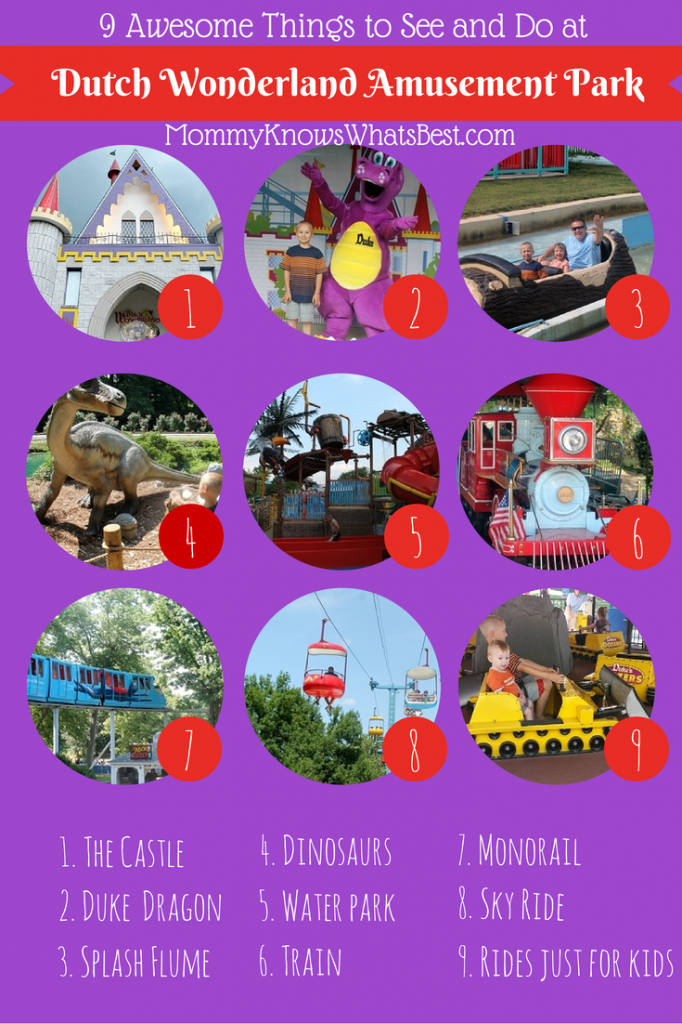 What to See and Do at Dutch Wonderland