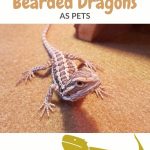 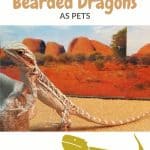 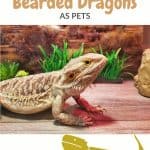 Thinking about getting a bearded dragon lizard for your kids? Here are the pros and cons. 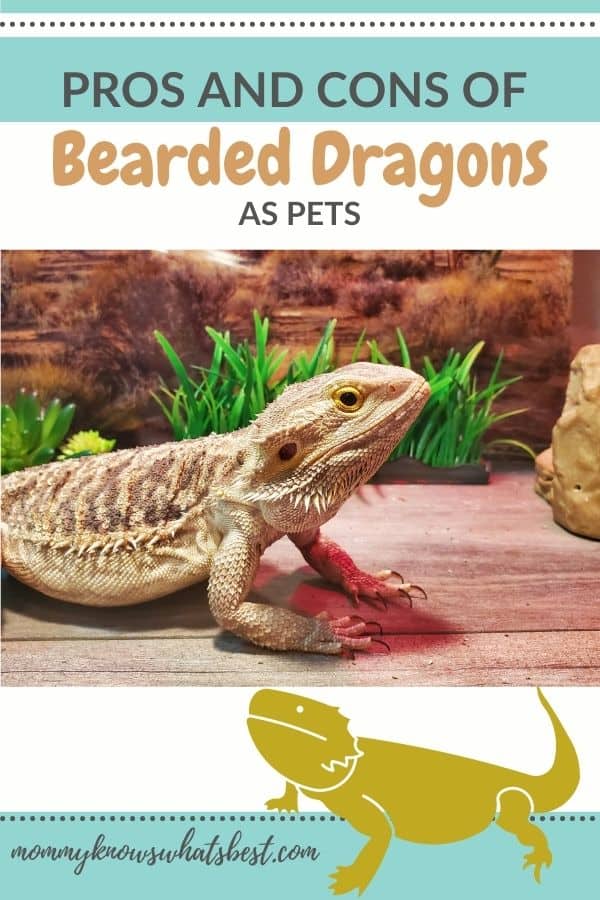 Does a Bearded Dragon Make a Good Pet?

Ever since the movie How to Train Your Dragon, my kids have been obsessed with dragons. When my oldest asked for a lizard for a pet one Christmas, we just knew a bearded dragon would be the best gift ever for him.

As expected, he was thrilled! 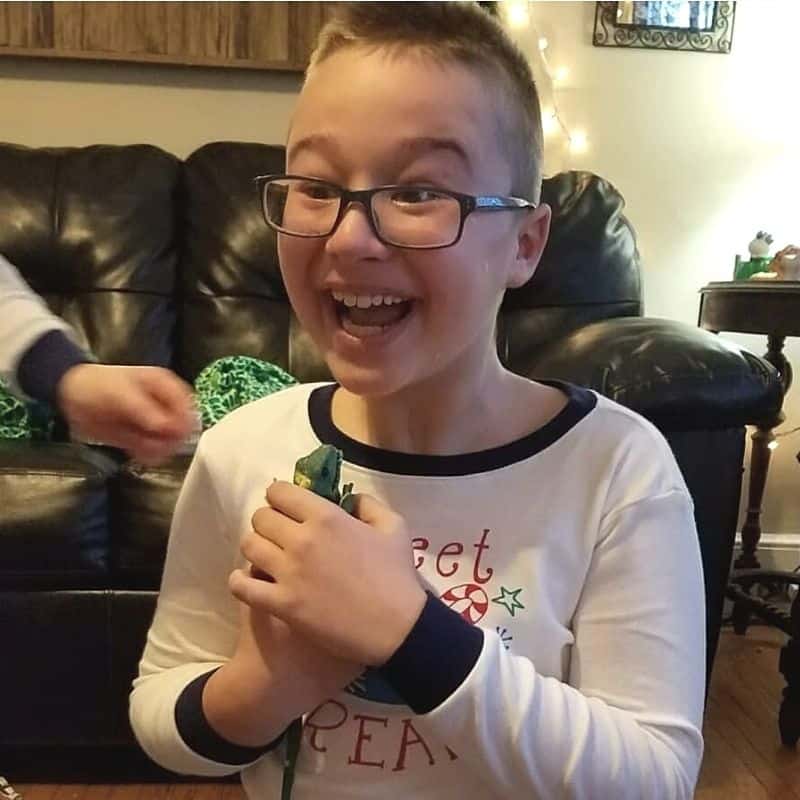 A little excited, no? He found out he was going to get a bearded dragon.

This wasn’t a decision we made lightly. A pet is a lifelong companion, not just something to get excited about at Christmastime and then not pay attention too for the rest of its life.

A pet is a lifelong companion, not just something to get excited about at Christmastime and then not pay attention too for the rest of its life.  Click to Tweet

My husband and I did A LOT of research before we came to the conclusion to buy a bearded dragon for our son.

This is our experience and what we have discovered. I hope it helps you make your decision!

What is a Bearded Dragon?

A bearded dragon is a lizard that originated in Australia. In Australia, bearded dragons in the wild live in dry and rocky places. Because of the type of terrain in their habitat, they are pretty good climbers. As omnivores, they feed on local vegetation and small hard shelled insects, or even smaller lizards.

As cold blooded reptiles, they need to bask in the sun to help their digestion, aid in calcium absorption, and aid in other body functions.

Bearded dragons here in the United States are bred and raised here. They no longer can be taken from Australia. 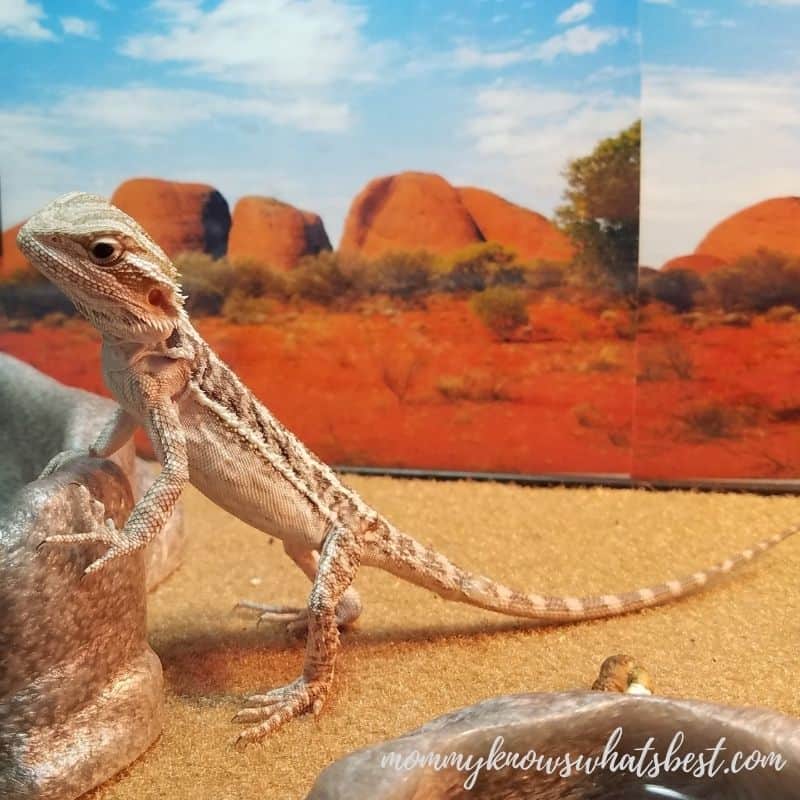 Beardies, as they are often referred to, have scales that can be tan to yellow in color. They have various patterns in their scales. Around the head and down the sides of the body are spikes, and on each foot there are claws.

They’re called ‘bearded’ because they puff out the skin around their throat when they are threatened or feel territorial.

Pet bearded dragons can eat a variety of fruits and veggies. They also eat crickets and different kinds of worms and beetles.

Why is a Bearded Dragon a Good Pet? Pros

Bearded dragons are loved as pets because they are fairly easy to care for, and if handled from birth, can be very friendly. 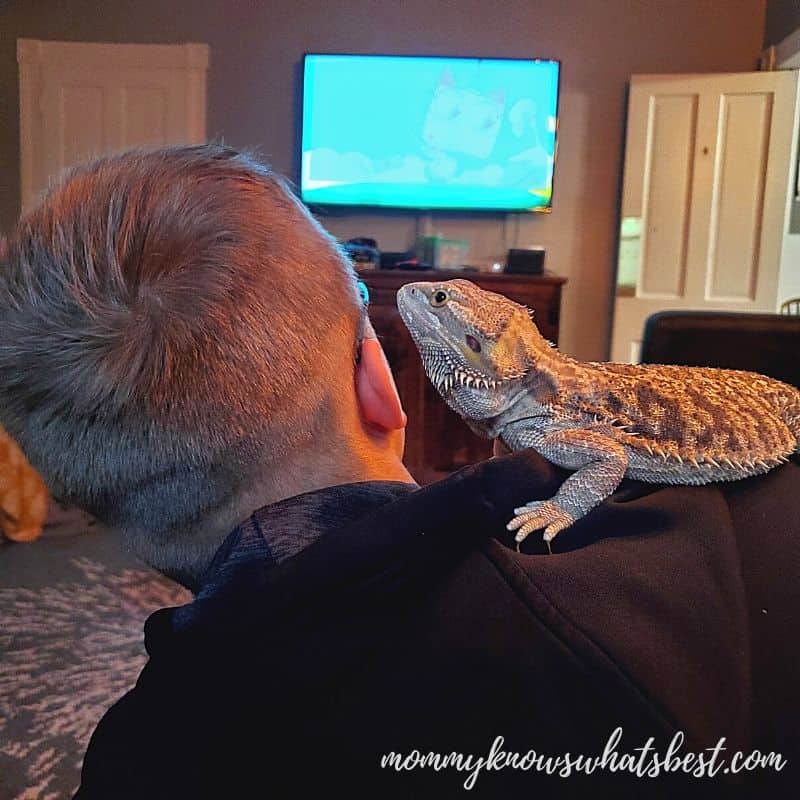 Even though they appear to look grumpy all the time, they can have the sweetest personalities. They’re quiet and actually nap or bask in the sun/heat lamp quite often.

Although they appear to laze around during the day, they still sleep very well at night, being diurnal animals. 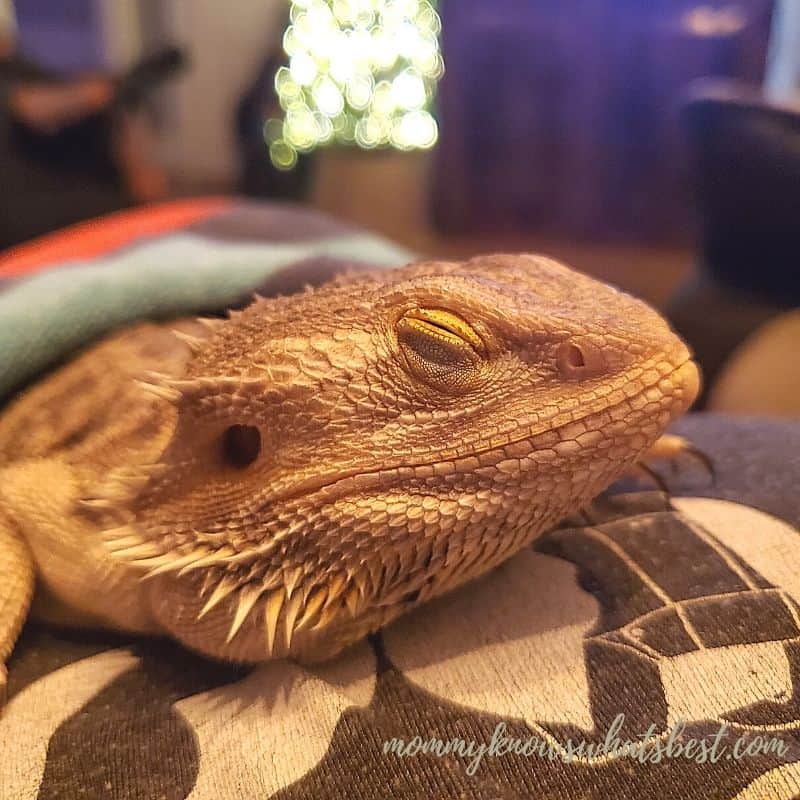 NOTE: Bearded Dragons go into what is called brumation sometimes, which is kind of like hibernation except that they are still slightly active and will come out to eat if hungry. During this time they will nap a lot. This happens for several reasons, the most likely being a change in the seasons or a temperature change.

They only grow up to 2 feet in length, making them a manageable size for a pet lizard. They can live 10-15 years in captivity if treated well. 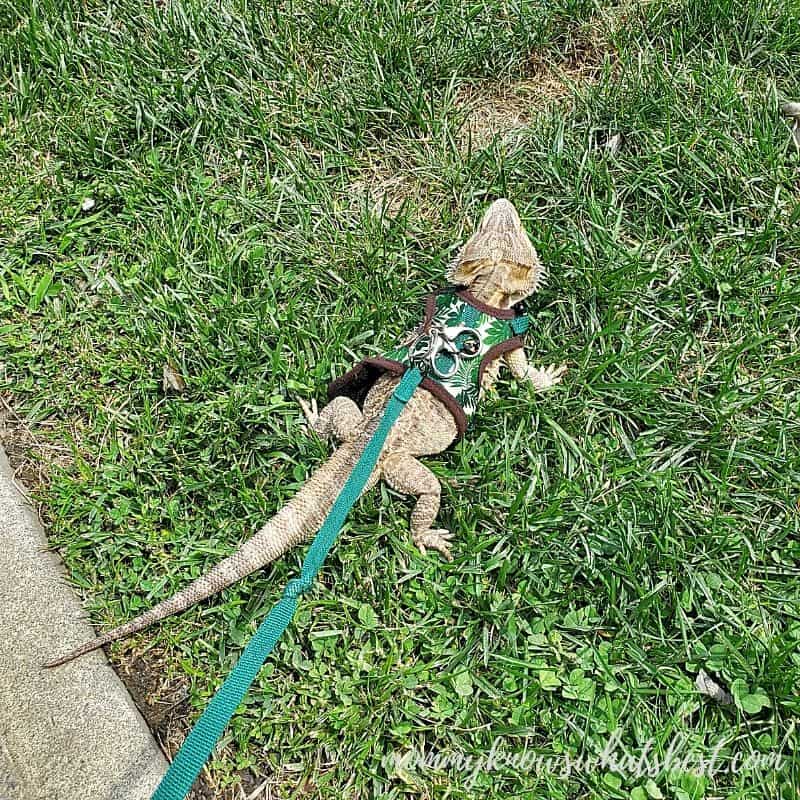 As babies, they tend to dart around a bit, but as adults, they’re pretty slow moving and calm.

Even though their droppings are gross looking, the bearded dragons are pretty easy to clean up after and don’t get smelly if bathed regularly.

Why You Might Not Want a Bearded Dragon: Cons

There might be a few reasons why you wouldn’t choose a bearded dragon as a pet.

Before you even get your dragon, you should do some research about all of the supplies you’ll need (get a checklist here). The initial setup can be costly, anywhere between $200-$300. While most of the items could last for the life of the beardie (lamp housings, food bowls, hammocks, etc), many items will need to be replaced over time (larger tank, light bulbs, etc). 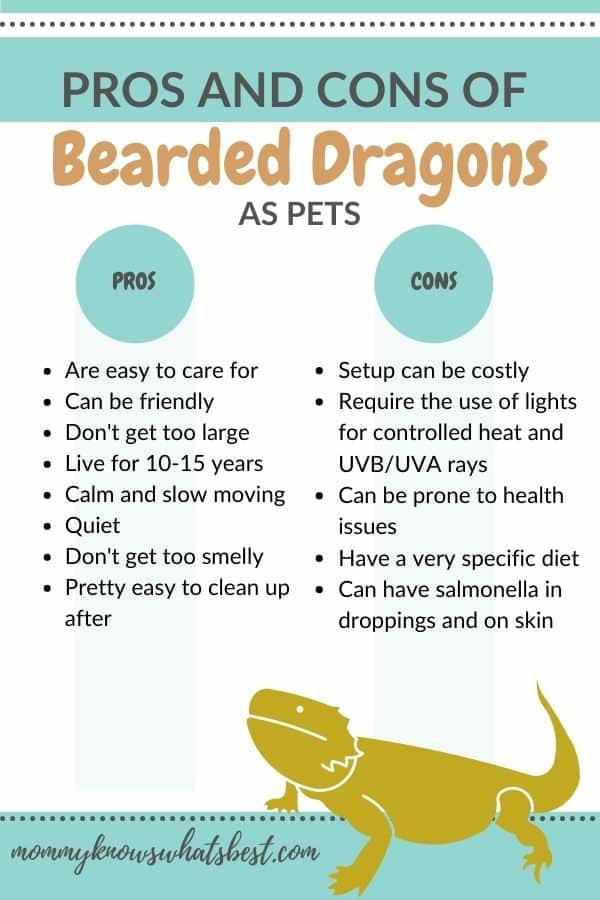 The tank itself can be an issue. While a baby beardie can live in a smaller tank roughly 20-40 gallons, older lizards do best in tanks that are 75-120 gallons. If you buy a small tank to start, you’ll need a larger one later on.

The tank also needs to be near an outlet. Multiple lamps and lights need to be plugged in and kept on for 12-14 hours each day. Those lights and lamps are used to keep the temperature steady and to provide the necessary UVA/UVB rays the lizard needs to stay healthy.

To stay healthy, bearded dragons eat a very specific diet. They need a balance of fresh fruits and veggies, along with protein. Too much or too little of either can make them sick.

Beardies also need reptile calcium supplements in their food to help them stay healthy and to help their bones to stay strong.

If you handle your bearded dragon, you need to be concerned with salmonella and other bacteria that can be on its skin and in its droppings. Proper handwashing is vital after handling a bearded dragon.

As I said in the beginning, a few years ago our son asked for a lizard for a pet. After doing our research, we settled on a bearded dragon.

Spike was adorable. He was so little at first that I was afraid to hold him. I thought I’d drop him and he’d dart away. 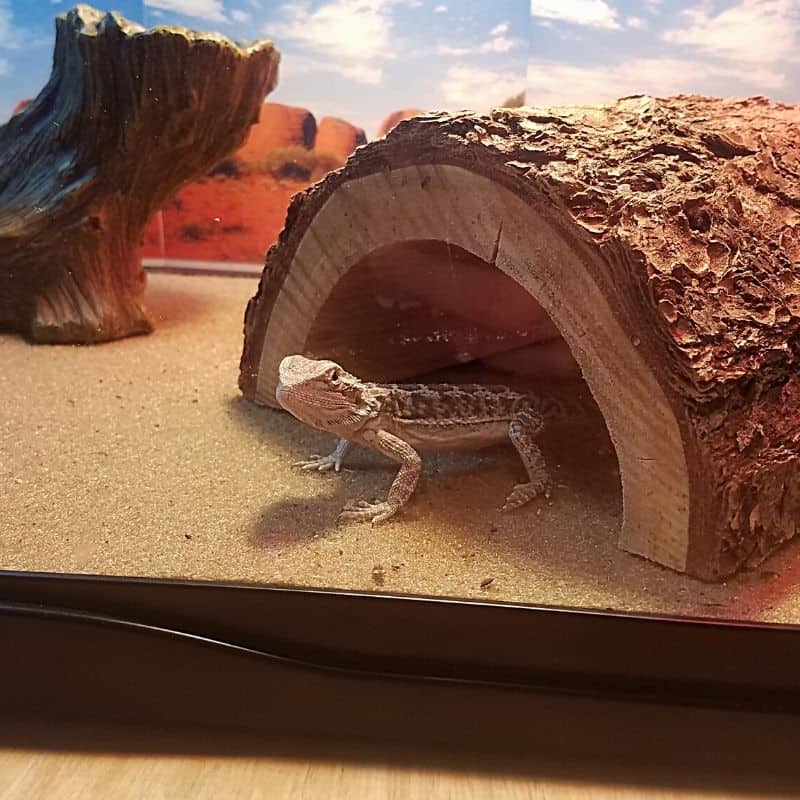 After a while, we got used to holding him and handling him. His little spikes were poky, but we found that we couldn’t be hurt by them. His claws, though, could leave little scratches if we weren’t careful. 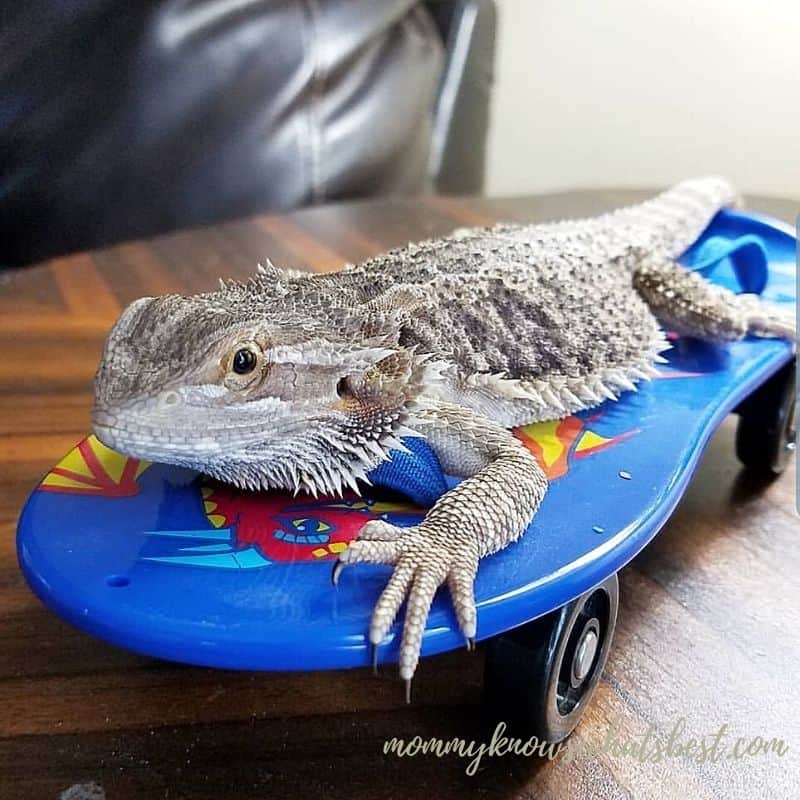 At first, I found it so gross to feed him. Live bugs weren’t my thing, but Spike loved them. Eventually we all got used to feeding him crickets and mealworms.

Of course, we also make sure that he has plenty of fresh fruits and veggies to eat too. He loves romaine, strawberries, and apples the most. 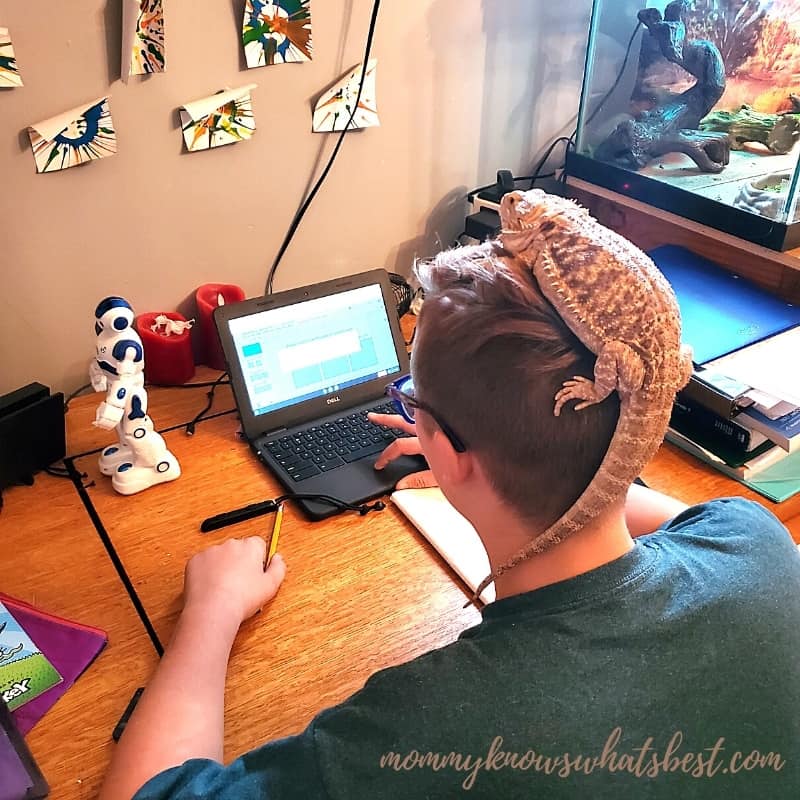 The kids love to hold him and carry him around the house, and he loves it too. There are even times when I hold him.

He has this look like he’s constantly judging us, but he has a sweet personality. It even seems like he’s smiling sometimes. We can tell when he wants to come out and play when he follows our movements in his tank. 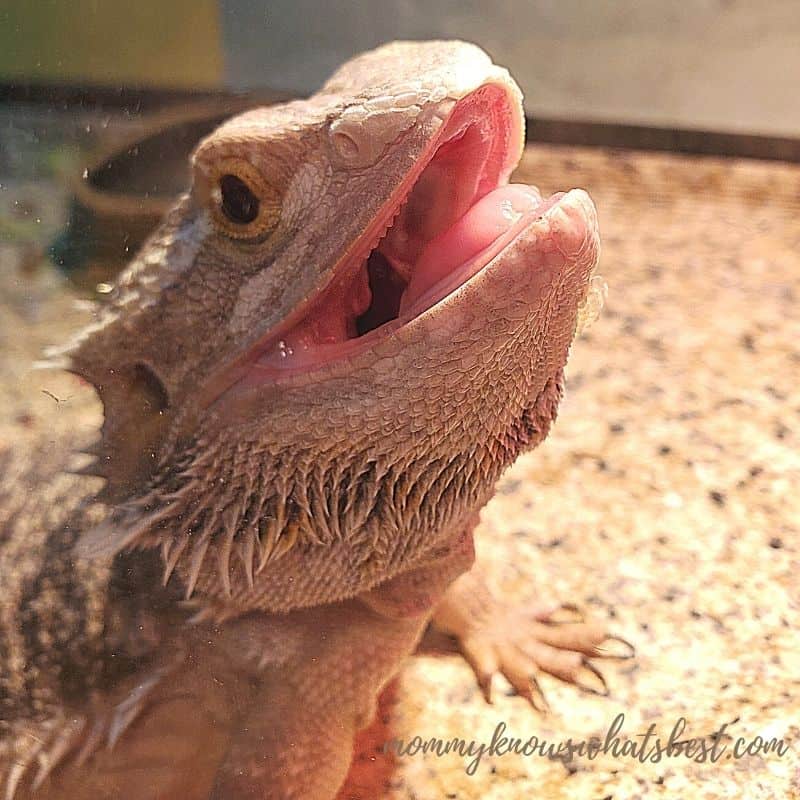 Cleanup isn’t too bad. His droppings are a combo of #1 and #2 (their pee comes out as white uric acid, called urate), so it’s usually all in one place. The substrate in our tank is tile, so we clean up the droppings and wipe it clean with organic reptile habitat cleaner.

The first tank we bought was a 40 gallon tank that came with the whole setup: lights, food bowls, thermometers, and a hideout. It was pretty good for the first two years, but then we bought a 75 gallon tank so that Spike had much more space to move. (Bearded dragons reach full adulthood between 11-18 months.)

He’s one of the best pets I have ever had. If you think you can handle everything that’s needed to take care of a bearded dragon, then I really think you would enjoy one as a pet.

Want to see more of Spike? Check out him out on Instagram!  There you can see many other pictures and videos of him, including one of him chasing and eating crickets when he was younger. 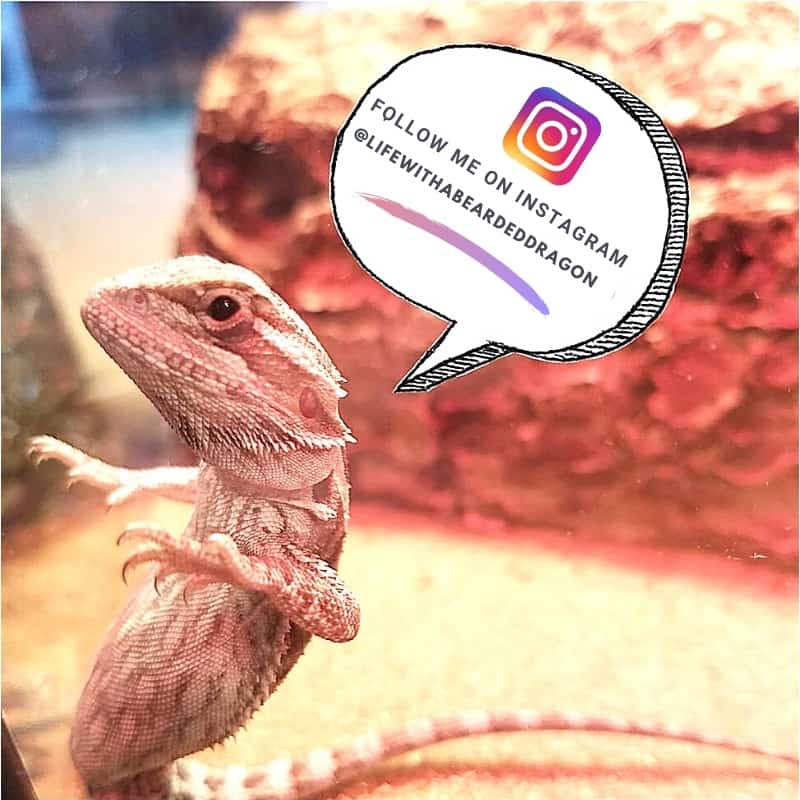 What You Need for a Bearded Dragon

Think you’re ready for a pet beardie? Get this detailed checklist here to make sure you have everything you need!

Getting a Bearded Dragon as a Pet?

Are you getting a bearded dragon for a pet? Have any questions? Feel free to ask below in the comments!