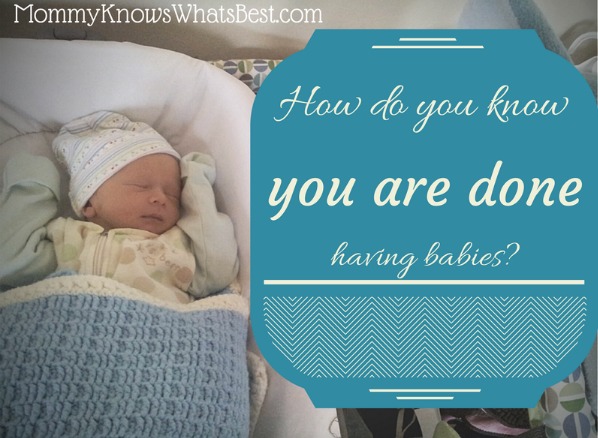 “So, when are you going to have another baby?”  My husband and I hear this often, especially now that our third baby is now over a year old. Read that? THIRD baby, as in, we already have three kids. Three adorable, rambunctious, crazy, talkative kids. “Are you done having babies?”

My gut reaction is to look at them in disbelief or to grunt because it’s the same person asking for the millionth time. Do they not see the whirlwind of kids running around me? Do they not see the crazed look in my eye when I have repeated myself for the umpteenth time about not fighting with each other or throwing food on the ground? Do they not know that my daughter, my 3.5 year old, STILL wakes up at least once every night, interrupting my precious sleep patterns?

Yeah, they know. They also know we totally and absolutely love our three kiddos, so they ask anyway.

I guess they can’t help it. I mean, we had three, so why not one more? It seems so easy, doesn’t it?

For us, not so much. First, my doc said that I’d be putting myself and another baby at risk if I were to become pregnant again due to the fact that I had three (necessary) c-sections. While chances are both I and a new baby would end up healthy, there was a slight chance of complications, especially when it came near the end of pregnancy. (I know plenty of people have had multiple c-sections and have been A-OK, but every case is different. That, and I would not be a candidate for a VBAC…)

Then there’s the slight problem of where in the world will we fit another kid??

We’re pretty certain that we know we’re done having kids. Three is a great number for us, and we’re a happy family. Before we had our third baby, I thought two was going to be the magic number since I was having trouble getting pregnant, but we were blessed with our third baby after nearly 18 months of trying. Three. Three is a good number.

Honestly, to really figure this all out, you know, if we’re done having babies, I came up with a pros and cons list of sorts. Sometimes, you just have to write stuff down to get it all out of your head! 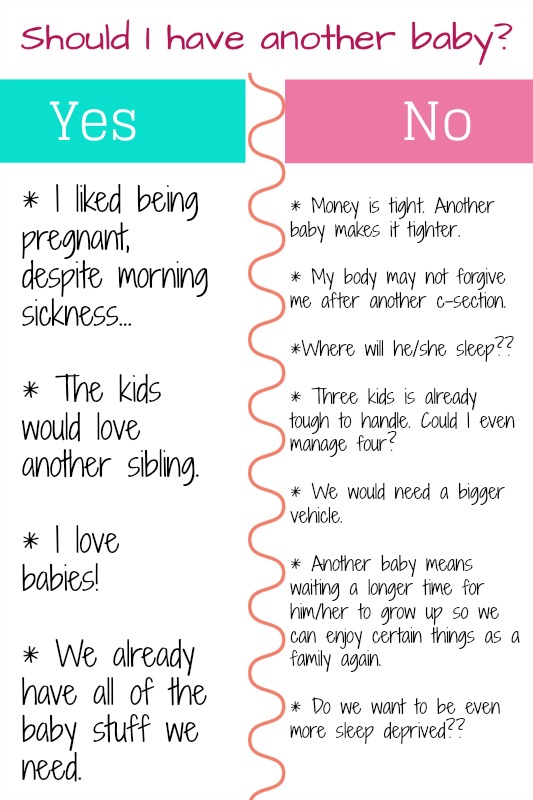 I totally admit that some of these items are selfish. Why shouldn’t they be? Having a another baby is a HUGE decision, one that involves, well, myself.

I also know that some of these things can be fixed or managed. Since we already have all of the major baby stuff we need (crib, clothes, toys, swing, sling, wrap, high chair, pack n’ play, etc) we wouldn’t need to spend much money, but there’s still the issue of diapers and, should I need to use it, formula. We could also manage to find a bigger vehicle, but that may be a bigger car payment than what we can handle right now.

We also love our kids, and another child would be just as loved.

But the rest always makes me think. Could I handle four kids? There are many people who say that after three to four kids, it just gets easier. Does that just mean birthing the child and then having him or her around as a baby? I picture four Tasmanian devils running around my house. Ever see those critters? Yikes.

And then there’s the matter of my weight loss, which I didn’t add to the list (yep, being selfish again!). Since March 2103, I have lost almost 50 lbs, which brings me back to a post-baby post-pregnancy weight that I haven’t seen in 8 years. Do I want to gain some of that back, putting me once again at risk for gestational diabetes or heart disease, both of which run in the family?

It’s a lot to consider.

Do you ever really know if you’re done having kids? I mean, does the universe throw you some giant signal telling you enough is enough? Does your body just stop making babies naturally, when it’s time to stop?

For some people, I guess they just know they are done having babies. Some people are perfectly content with one child. Others like having two or three (which is fairly average now, wouldn’t you say?). Some say they’ll have four and be done.

So Are You Done Having Babies?

I think it’s definitely something to take time to think about, especially if you have some of the pros/cons that I have in my list above. You might need to do some math, check your surroundings, make lists of your supplies, and talk to other parents who have been there before.

There’s no magic secret to knowing if you’re done having babies. Only you and your partner can decide if it’s the right decision for you.

Make your own pros and cons list and have an honest discussion. It wouldn’t hurt to discuss these things with your doctor as well. Here’s a FREE PRINTABLE to help you get started!

Tell Me: How did you know you were done having kids? I’d love to hear from you! 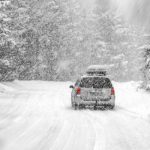