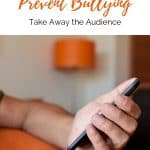 If you are a bully, you most often mock or hurt someone in front of whom?

The answer for all of the above questions is the same: your audience. One Way to Stop Bullying 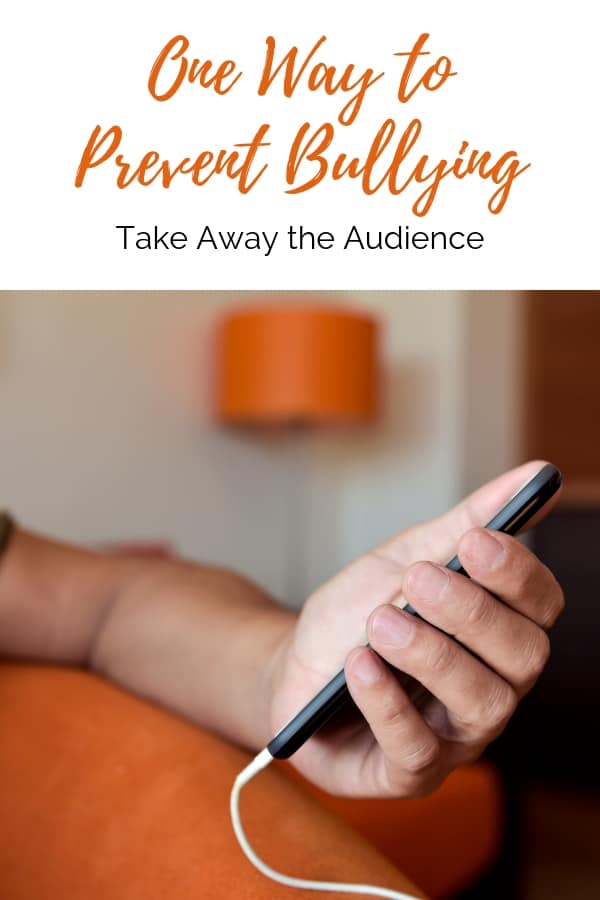 I don’t know why it never occurred to me before, but I think I have one possible solution in the fight against bullying, taking away the audience, and this inspiration came from this week’s headline about an elderly woman being bullied on a bus by middle school kids.

What caught my attention tonight as I was watching the news is that one of the kids, who ‘apologized’ (if you could call it that), said all they wanted to do was to get some attention by uploading the video to YouTube and maybe sending it to the Comedy Central show Tosh.O.

The problem lies in how that audience would be taken away. How do kids post these videos? From their smartphones. And they view them on those same phones, or a tablet, or on a computer.

Take a second and think about it: how many young kids today have mobile devices that catch these sort of events EVERY DAY? I guarantee if you were to do some research, you’d find thousands of cell phone videos out there of people being bullied or beaten. Why? Because there is an audience out there, and audience of millions, waiting for this stuff to be uploaded.

Why would it be so unbelievable to think that many, many instances of bullying would stop if the audience was removed?

The problem is that those devices would have to be taken away, substituted with devices that can’t take/post videos, or monitor them. And who does that? Yep, parents.

How many parents today do any of that?

My advice? Young kids should not have devices that can tempt them to use them in negative ways (bullying, sexting, etc.).

They need a cell phone? Get them one that makes calls and sends/receives texts. They have a tablet or computer? Monitor their activity.

Don’t be fooled by anyone saying that you should ‘trust them’ or respect their privacy. You are ultimately responsible for your kids.

Here’s more food for thought: digital files, i.e. videos, never go away. Think of all of the future bosses out there, waiting to find anything they can on your child when he/she is looking to be hired. Think they’ll want to hire a bully?

I feel like I’m beginning to rant, but it is all so sad. Sure, bullying has always been in existence, but to this magnitude? I was bullied as a child, twenty some years ago, so I know it’s been around. Think about how much more we are hearing about it and seeing examples of it today, thanks to the internet.

We now know how bullying has increased since the internet’s inception. The numbers have skyrocketed since everyone now has something to share.

We really need to examine our parenting skills as well. Our kids are being exposed to so much more adult stuff than what we were exposed to. They are beginning to ‘act’ like adults, wanting to do adult things, which is getting them into trouble.

The kid who wanted to post the video to Tosh.O? What is he even doing watching that adult show? And the father that said his son should not be further punished because he was acting like a stupid kid?

Where did your son learn all of that? I’m sorry, but kids should not know those kinds of words, or phrases, or ideas, or actions.

That’s the other problem: our kids are not ‘kids’ anymore. They are mini-adults, trying to be just like us.

That scares the life out of me.

I know that bullying may not stop just from taking away the audience, but it would be a step in the right direction.

We really need to step up our game, teaching our kids to respect all others no matter what the differences are or what might be popular to do or say.

I hope many parents out there who have seen or heard about recent bullying stop to take a moment to talk to their kids and instill in them a knowledge of doing good to others and standing up for what’s right.

What do you think? What is the solution? Is there any solution?